It’s the stuff that dreams are made of. You find a dusty old book in your home, the Antiques Roadshow fortuitously comes to town and, bingo, you have – as the Sunday Times described it – “one of the most magical works of the Edwardian age” on your hands!

The book in question is ‘Child Hazel’, written and richly illustrated by Ida Bogue who was born in 1885 and died, blind, in 1972. It contains some of the most magical illustrations of fairies since those of Cecily Mary Baker whose Flower Fairy series has enjoyed an enduring popularity since its launch in the 1920’s.

Bogue’s work was never published, and the article that was discovered by her relative was, in fact, a one-off book full of her enchanting fairy subjects. The cover she tooled out of leather, and even made the paper herself.

Ida spent much of her life painting from nature, and created many landscapes of Weymouth Bay and Dorset Villages. But her chief love was painting tiny watercolours of pastoral scenes –and it was this fascination that wrecked her eyesight, leaving her blind by the time of her death aged 87.

After consulting with her descendents, a decision was made to produce the series as limited edition prints. They faithfully reproduce Ida Bogue’s originals that she studiously worked on from 1912 to 1947.

To see a slection of prints please view them here

No trackback or pingback available for this article 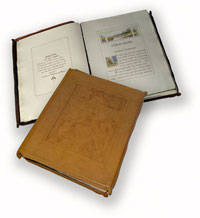 DEDICATED TO ALL THOSE Whose joy it is still to believe that, - Far from the restless haunts of men, - The meadows have their fairies, the Woods their elves, the hills their pixies And the streams their nymphs, And that The Forces of Nature are Divine.